As we count down to Paint Annapolis 2015, MFA will be featuring one – or two – artists of the day to let you learn more about the artists who are competing and exhibiting in Paint Annapolis.

Mr. Palmerio was born in 1949 in Philadelphia, Pa. and has been a resident of Sarasota Fl., for 22 years. He is a graduate of the Pennsylvania Academy of Fine Arts, and Barnes Foundation, Philadelphia Pa. Studied sculpture at the Frudakis Academy and metal sculpture at Tyler School of Art. A roofer by trade, and spent 23 years with the Phila. Dept of Recreation. He was the Recreation Director of the Ute Mnt. Ute Indian Reservation in Colorado. He has taught in community arts centers in Phila., Sarasota, and Colorado, including 7 years teaching physically challenged populations in Phila. He holds a boating Master Captain’s license, and is also a private pilot.

He is in numerous private collections throughout the country, including the Coville collection in Sarasota, the Grant collection in Reston Va., and Havard collection in Philadelphia. Commissions include 6 large murals for the Acme Market Corp. in Great Valley Pa., 10 x 30 ft. mural City of Phila., and two 12 x 40ft. murals for Motivation Inc., in the Orlando Airport, as well as 10 x 40ft. wall for the Duval House B & B, in Key West Fl. 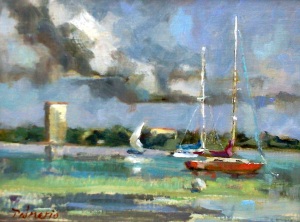 He won First prize in the Tarpon Springs Paint Out quick draw, Nov. 2014. He also won the people’s choice award in the Annapolis Paint Out for the quick draw competition in June 2914. He was recently published in Plein Air Magazine online, with an article dealing with his National Parks Artist in Residence programs, Everglades and Great Sand Dunes Nat. Parks. Sarasota Herald Tribune wrote a comprehensive article on him, and he was interviewed by Amy Tardiff on National Public Radio. Mr. Palmerio was on the Sarasota Fine Arts tours, in 2006, ’09, and ’13, also giving painting demos at the Galleria on Ringling campus. He was interviewed by Linda Carson on Channel 7 News. He was accepted into the American Impressionist show in Carmel, Ca. in 2011 and also the top 100 National Parks Artists, where he exhibited in the Coutts Museum in Kansas, for the Paint America Contest. He was featured in the May issue of Scene Magazine of Sarasota in 2011. He continues to win numerous awards, and teaches privately, and holds workshops throughout the year. Private commissions and mural work is available.

His painting demonstrations and donations have helped numerous fundraisers throughout the country. His plein air paintings emphasize a soft and loose brushwork that captures the fleeting moments of nature. His abstractions originate from the flora and fauna of nature, which bursts forth into a dynamic flow of painterly rhythms. He recently had a show in Chelsea NY, in January of 2014. You can view the show on his web site, at palmerioart.com, as well as a full body and range of paintings. Please feel free to call for more info: 941 232 4497 or 941 929 6746. palmerioart.com

Learn more about the 30 international artists participating in Paint Annapolis

Paint Annapolis Artist of the Day – Carol Magurie
Thinking about becoming a member? Find out why you should!