If you do not have an account with MFA, you will be asked to create one during the entry process. Already have an account, but need to update your information? Update Now!

Paint Annapolis is a seven-day juried plein air painting competition held June 4 – 11, 2023, that brings artists from across North America and Europe to Annapolis and Anne Arundel County. For 22 years, Paint Annapolis has been a premier outdoor painting event, bringing together artists and patrons to be part of a community where colonial architecture meets maritime heritage. Apply to be a juried artist to paint our beautiful historic town, exhibit your work in Circle Gallery, and compete for cash awards totaling $15,000.

Paint Annapolis 2023 is presented by Maryland Federation of Art (MFA), a 59-year-old non-profit organization committed to exhibiting new and innovative art created by living artists. MFA is based at Circle Gallery, 18 State Circle, across from the Maryland State House in historic downtown Annapolis.

Suzie Baker is an award-winning artist whose paintings are regularly on display in magazines, prestigious national shows and plein air events. She has served on the board of Oil Painters of America since 2014, including presiding as president from 2020-2022. Suzie holds signature status in that distinguished organization as well as the American Impressionist Society, American Women Artists, and others. In addition to being a still life and portrait artist, Suzie has been painting en plein air since she was a teenager. A sought-after instructor, for her humorous and informative style, Suzie teaches through videos, virtual classes, and workshops around the United States, Europe and close to her home in the Houston, Texas area. See her work and learn more at suziebaker.com.

Mark Karnes received his MFA in painting from Yale University in 1972 and his BFA in painting from Philadelphia College of Art. He has received grants from the National Endowment for the Arts and the Maryland State Arts Council, as well as a Fulbright-Hayes grant for study in Florence, Italy. His work has been widely exhibited both nationally and internationally and can be found in numerous private and museum collections, including the permanent collection of the National Gallery of Art, Washington, DC. Karnes lives in Baltimore, MD, where he has taught drawing and painting at Maryland Institute College of Art since 1974. See his work and learn more at markekarnes.com.

NOTE: Should the exhibition space be closed for reasons beyond our control, MFA reserves the right to move a planned physical exhibit to our online gallery. 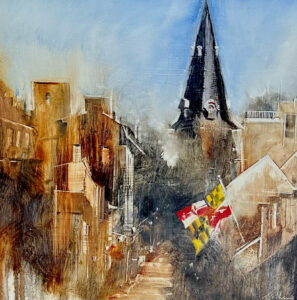